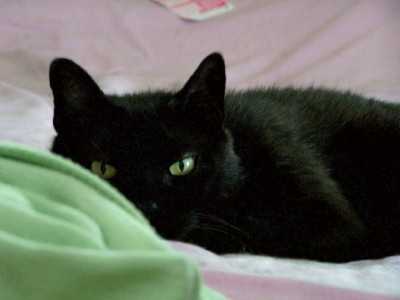 Dusty was Mom's cat. His birthday is celebrated on January 9th, 1995, and he went on to the Kittie Heaven on September 19th, 2009, at the ripe old age of 98. When Mink was two years old, the family found Dusty to take the place of Millicent (the first), a small kitty who had recently passed away. Dusty was advertised to us as a "runt" and "female," neither of which turned out to be the case. The Doctor said he had never seen such a big cat. Mink provided Dusty with a purring kitten doll which he nursed for nearly a year. Definitely Mom's cat. Dad, not so much. There seemed to be a bit of rivalry for Mom's attention between the two, Dad and Dusty.

Ducks were Dusty's favorite, and ANYTHING that crunches. No one could eat any sort of chips in peace when Dusty was in the room, and since he could open all the doors, from the heavy front door to the sliding glass doors, there was no keeping him out. Dad even wrote Dusty a parody song "You put me out, but I get in again. Ain't nothin' gonna keep me out!" (and so on). We had to leave the doors locked or he could open them. When Dusty wanted to come in we have 'Cat bells' to ring at the front door and on the deck, but he would open the screen door and let it bang shut at the kitchen when he was really serious about it. Dusty has frightened scores of guests with this door banging. We had one baby sitter who called the police....

Dusty's spot on the bed was right beside Mom, and woe to the cat who tried to take his spot! In the last year he was so put-off by the interlopers he would leap from the top of the dresser to the ceiling rafters (which are exposed) six feet over his head and go sleep in another room. One could only wish to be able to leap through the air to a location five times higher than one's head when one is in one's eighties.

The Archy Bunker of the Cat World. 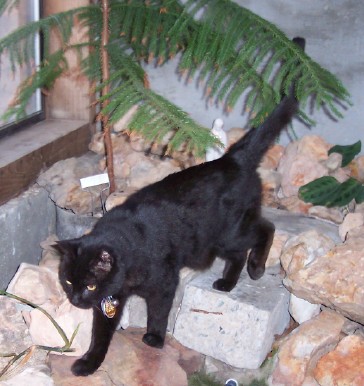 Dusty in the Atruim Garden at The M.A.D. House Artists. 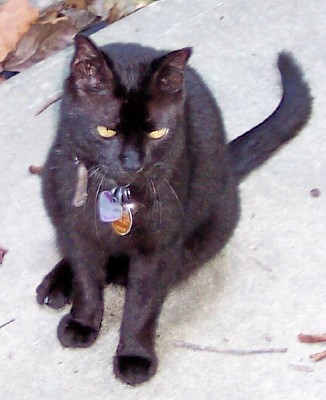 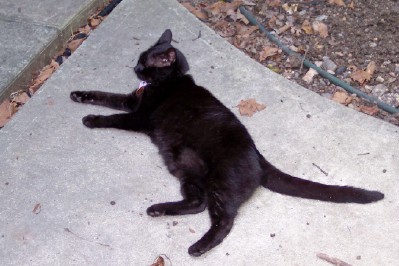 Mom will surely miss the way Dusty would grab her arm with all twenty claws and sink his teeth into it...and the way she would bite his head and pull him off...Those were the days.

Rest in peace, Dusty. Hope there are lots of crunchy foods in Heaven!