Turtles at The M.A.D. House Artists 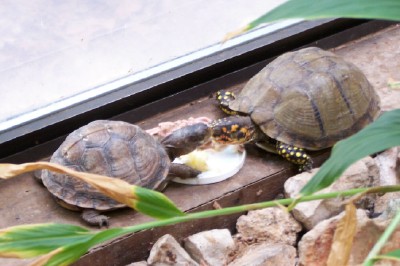 We call this picture "Naked Lunch." Yertle is playing hostess to the Male turtle, Grendel.

Grendel ran out on Yertle in July of 2007 while they were out on the deck taking in some moonlight. By September he had made it as far as the neighbor's driveway, where Mom recognized him and brought him home to Yertle. When Grendel refused all the treats we could offer for many weeks, we decided he must have a vacation in the great outdoors to have access to whateveritis he DOES like to eat.

Believe it or not:

The man who NAMED Grendel in the turtle naming contest in 2007, Dr. Philip Levin, was scheduled to visit The M.A.D. House Artists on May 7th of 2009. Philip and his lovely daughter were to stop for lunch on a national tour to attend son/brother's college graduation. That part was not hard to believe. What was surprising was when Grendel showed up in the middle of our lane the day before the scheduled visit. So, at least for May 2009, We once again enjoyed Grendel as an house guest, and that time he was eating anything we offered. Grendel moved out again that fall, and has not shown up recently, but you never know.

Yertle was an unusual Reptile. She recognized our voices and would come running to see if it was perhaps lunch time when one of her people came into the room. Yertle had a passion for canned cat food, any T-SHIRT sales also contribute to cans of cat food for the turtles. She would eat about one little can per month, enhanced with a bit (six or seven little colored pellets) of Turtle-style KIX (tm) from the Reptile supply, and a bit of Canteloupe or Honeydew, or Banana when available. (The cats get Diamond Adult Cat...from a forty pound bag.)

About the turn of the new year to 2008, Yertle had some kind of wanderlust. Whereas she had stayed in a small location for years at a time, suddenly she was leaping from the garden wall and running all over the downstairs. Turned out the light was the problem. She wanted her basking light.  Yertle was hibernating by staying half submerged in the upper pool of out cascade into the pond. We think she stayed hydrated and liked the heated water from the fish pond. 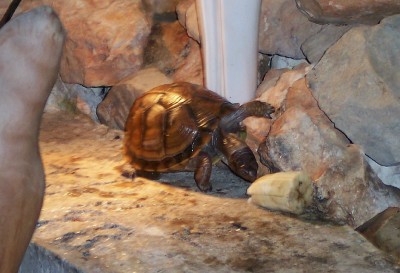 Yertle lived in the atrium Garden beside the kitchen. As with whatever other turtles we may have recently rescued from the center of the roadway. She was been such an interesting and companionable guest we did not had the heart to let her go. Yertle passed on to the pond in the sky in 2009. We missed having such an engaged turtle until recently when SOUP came to live with us. 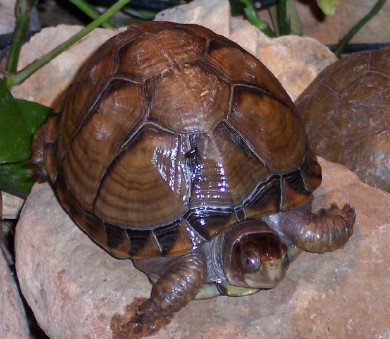 Yertle had the prettiest BOW formation just behind her head in the scales of her shell.

Have you ever seen a more feminine Turtle? 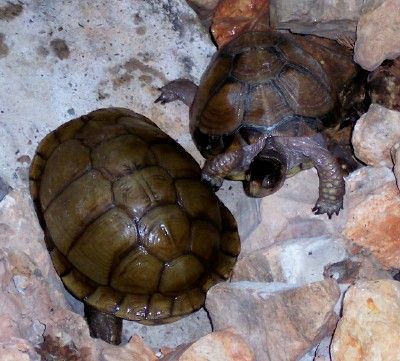 A nice photo of Yertle and Grendel. 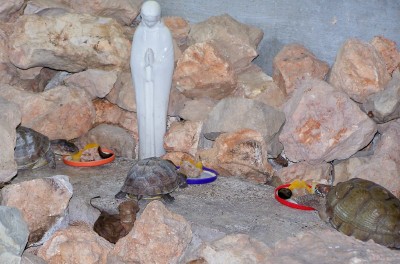 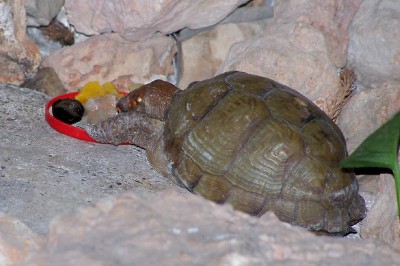 Finally we had just one male turtle named SOUP. The little girl turtles, Myrtle and Teeny, lost interest in our cuisine, and after the record heat was over we released them into the nice wet garden. Myrtle seems to have disappeared, but Teeny has stayed closer to the house and we have occasional 'sightings'. Soup was friendly, asked for food when he is hungry, swam in the little pool we invented from some pebbles and a glass Pie Pan and followed Mom around the first floor. Soup liked to follow the sun from door to door during the day. He was pretty laid-back for a reptile. As long as he was eating well, we continued to enjoy his company. He has also been released back to the Wild.