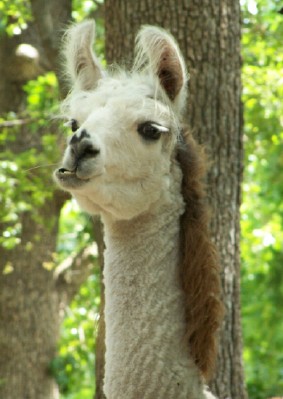 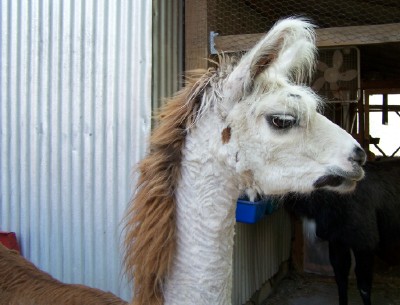 Magical Flag came to us in April of 2000 from The Double B Llama Ranch in Washington State. (His mom and dad were Magical Bounce and Madam Bee Bee.) His owner, Barbara Bergen, was wise enough to insist that we buy a companion llama and offered one of his siblings, but we had already chosen Sir Charle from North Dakota, so we did not have the pleasure of getting to know another of the Double B Llamas. Barbara Bergen was wonderful in coaching us in llama lore and guiding us in the early days of getting to know the new llamas. The Sisters at the Monastery Llama Ranch in North Dakota who sold us Sir Charle were also very helpful.

Magical Flag was a yearling when he came to live at The M.A.D. House Artists, and as the younger llama, was soon shown his proper place by Sir Charle who was three years old at the time they came here. We have always thought that perhaps Flag may be the smarter. When they have gotten loose, it is easier to catch and halter Charle, because he likes rabbit food (pure alfalfa pellets), but we only ever have to catch Sir Charle, because Magical Flag would rather be home, and just follows us home without a lead.

As a matter of fact, in the early days, before we learned about gates and such, when they did get loose, it was always Flag who would hang back, looking sadly at us as if to say,
"I really would rather stay home, because I KNOW this is the stupid thing to do, but I HAVE to go with Charle, don't you see?"

Only one time did he ever knock Mom down. Magical Flag had gone into a small area behind the barn to avoid his halter, and as Mom tried to put it on his face, he turned sharply and knocked her to the ground right on her face. Mom thought about all the ways to prepare llama steaks and llama rugs as she walked the 28 feet to the front of the barn. But what should she find there, but a white and rust llama standing quietly in the trailer, waiting for his halter and looking very contrite. He had not meant to knock her down, it was just a tight corner. Neither of the llamas has ever intentionally hurt anyone here at The M.A.D. House Artists, but they certainly do have a well developed sense of humor.

Magical Flag did not like having his wool sheared. 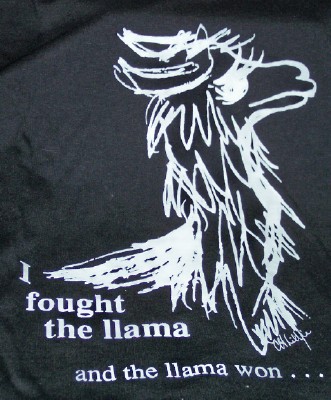 Mom's original art, a portrait from life, on the T-Shirt 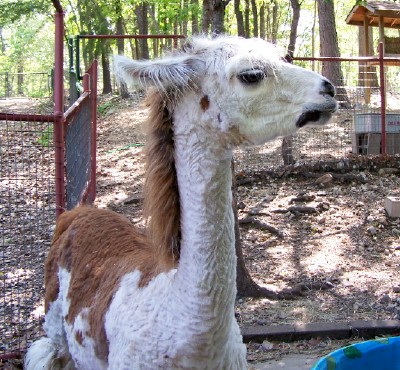 This T-Shirt  portrait is from life, and as you can see from his portrait on the T-Shirt, He did NOT like having his hair cut. When you see the llama put his ears in this position it is time to cease and desist. If you continue doing whateveritis you were doing that caused this reaction, you are more than likely to be shown the less pleasant side of llama personality. Magical Flag was about two years old when this portrait was drawn. He was having his wool sheared for the hot summer in Oklahoma, which is not like the cold mountains of the Andes where the llamas originally lived. (Or Washington State...) Flag has great wool and a low tolerance for the heat, so we shear him in spite of his distaste for shearing, and he came to be a lot more resigned to the process. Llamas have wool with no oil, it does not smell when it gets wet. Llama wool does not shrink, garments made of llama wool can be washed with the rest of the laundry and dried in the dryer. There is just about nothing better. 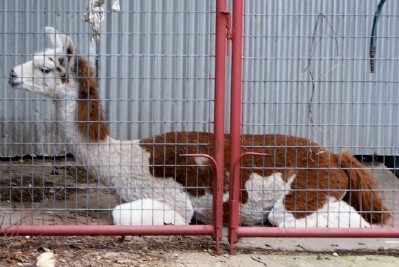 CUSHED (close to the cool concrete)

REALLY CUSHED (it gets really hot here in Oklahoma) 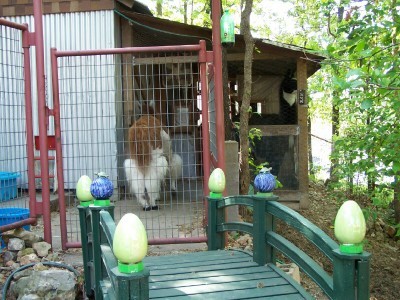 Dinner time. Come see us, you are welcome any time.

How to approach a Llama

When you approach a llama, you keep your hands out of sight and present your face for kissing. If you approach with your hands out reaching to them, they assume you are being aggressive, as they fight with theior front feet. There is no concern with a llama for being licked or bitten, Llamas cannot stick out their tongues, so they "kiss" you with their soft furry lips while they are sniffing you and thery only have lower teeth, so biting is out of the question. Magical Flag rarely spits at anyone who is not trying to shear him or steal his lunch out of the feeder, preferring to investigate the newcomers. Llamas have a sense of humor, and are always trying to be 'one-up' on you. Flag follows Charle in the Christmas parades in and around Delaware County Oklahoma, where they take prizes each year.

Feeding llamas is pretty easy, and can be inexpensive. Llamas will clear your yard of flowers (especially roses) in a matter of minutes, but when they have their own space, they eat field hay, 14% creep (in small quantities), cut-up carrots for treats, grass, rabbit feed (in small quantities), and other grains. Their habit is very tidy, and they carefully place their waste products in a neat pile in one spot in the yard. Llama waste is almost odorless and can be used on your flower beds immediately, as it does not need composting and will not burn your plants. A llama can go indoors with you for an hour or two without needing to relieve himself. This makes them great for visiting people in schools or nursing homes.

Llamas will fight off dogs and other predators. Many people keep llamas with their sheep or goats. But llamas are not invincible, and do better in a small group. Dogs can kill a lone llama. We have two geldings so they can keep each other company. Llamas like to be part of an herd, and become lonely and pine if they are all alone. As for fighting the llama, we were completely won-over by them, and have been very glad we made the decision to have Magical Flag and Sir Charle join our family. The llamas won our hearts, even this one who dislikes being groomed. 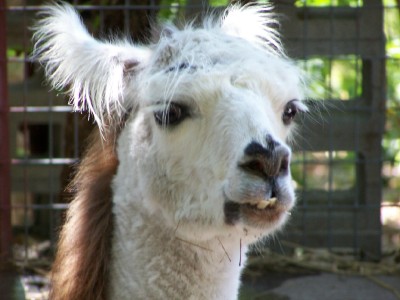 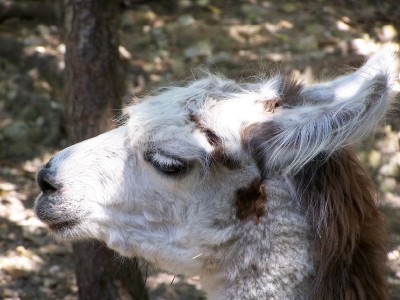 DON'T even think about it. 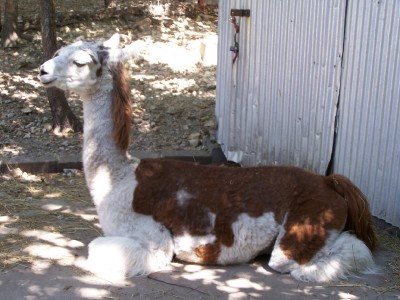 Cushing is so nice. 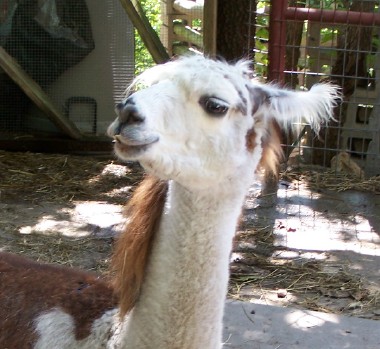 Are you SURE you said that? 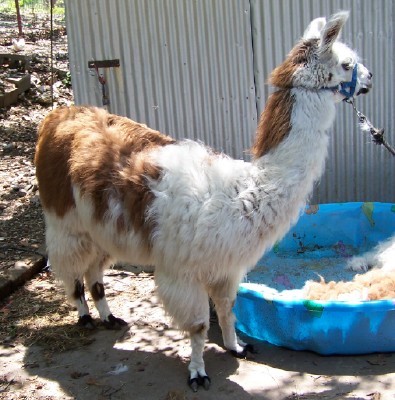 Gives a new meaning to "Shaggy"
In Oklahoma summers, Shear it or DIE! 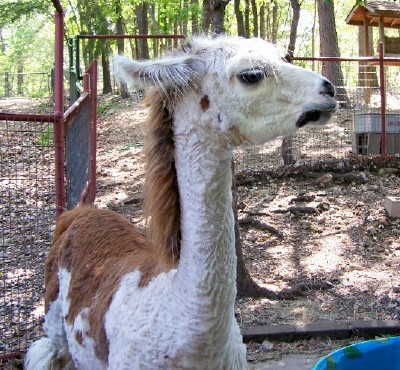 How much more comfortable NOW!
(like it or not...I think he is coming around in his old age)

Magical FLag left us a couple of years ago.

In order that Sir Charle would not be alone (llamas cannot live alone) we have adopted a new fellow, Snoozer, to keep company with Sir Charle. We dearly miss Magical Flag, and wish to say how grateful we were for the many years he spent with us. Snoozer will have to have his own page and story. Stay tuned.

Link to our other llama, Sir Charle