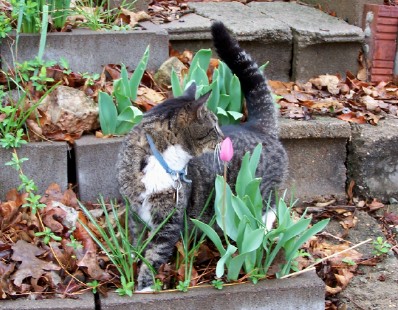 Xena came to us as a very sick kitten. She had suffered radical neurological damage in a car engine traveling between Vinita and Langley, Oklahoma in May of 2001. Siezures, spasticity, falling, spasming...the family who had her was thinking of putting her out of her misery. Mom, of course, could not let them do that. At our home, Xena soon discovered that the eight foot fall through the spiral stairs could be avoided by asking to go out the front door, going around the house outside, to enter the downstairs safely from the door. Even as a six-week-old kitten she was exceptional. Eight years later, and a lot of tiny cross-training to help the synapses, Xena is a mighty hunter. She still spasms, and still falls over occasionally, but the vet says she runs "like a Big Cat."