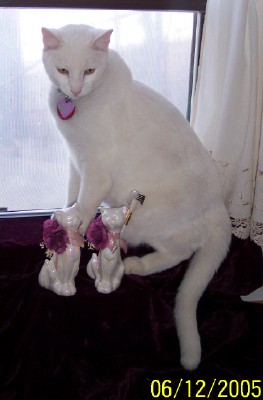 Nemesis was a fabulous kitty. She was the daughter of a feline whose claim to fame was one green eye and one blue eye. Nemesis was born in February of 2001 in a dry docked boat on a friend's property. Our son had suffered the loss of his first cat, 12-year-old Sam, at the hands of poachers the previous fall, and Nemesis' mother had several kittens, some yellow like Sam, and several white ones. Guess which he chose? She was wonderful! Nemesis would drape herself and be completely relaxed in any situation. It was the fox and the deforestation of the neighboring property that was her downfall. With the underbrush and tree cover gone, the white cat had no way to hide. One night in the spring of 2006, we heard the vixen cry, and the next day Nemesis was nowhere to be found. It was almost exactly a year later when the new neighbors said they had seen her remains and we were able to recover them for a proper Ghat. This legendary kitty will always be fondly remembered by all of us here at The M.A.D. House Artists. 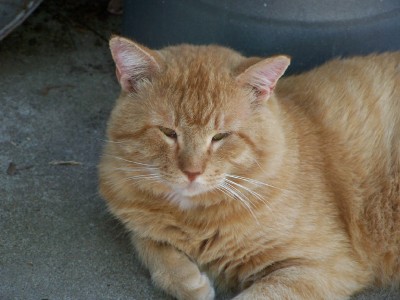 Samuel A Cat is the second of our son's Cats by that name. The earlier one was found as a kitten at the playground in the Cape Coral Florida children's park near our Florida home when Kim was 2 years old. They grew up together and Sam's murder, when our son was 14, was a violent and unfortunate event. Who needs to use a hollow tipped rifle bullet to kill a 12-year-old cat with arthritis? Sam (the original) was duely cremated and his cremains are safely stored in an appropriately dignified Ginger Jar.

This current version was a complete surprise to Mom. She had captured the latest stray, put him through the regular processing (shots, worming and neutering) and was interested to find that he was as friendly as Nemesis and as chubby as Sam (1). Mom immediately messaged our son to alert him to the return of the cats. It was just too odd, seeing the new cat who looked so much like the one and acted so much like the other making his mark on our family (as well as the furniture...) Now Samuel A. Cat resides in the barn where he can jump out at Whiskers and Roger all day and all night, and his minor anti-social behaviors are less of an hazard.

Although our son and Samuel A CAt didn't meet until after college and career, Sam (the second) was so much like the previous cats, Nemesis and the earlier Sam, that this stray was easy to recognise as his Cat. This one is another 'dumped' pet, one that someone abandoned in our woods. Samuel A. Cat showed up in 2006, coming to eat in the barn. After the usual trip to the vet for shots and neutering, Sam has settled in in a big way. Mostly he wanted to be the Alpha male, which is problematic because Mom's cat, Dusty (now demised), had held that title for many years. Of course the solution is a maze of Cat Diplomacy, involving doors and schedules. It boiled down to having the more senior cats live closer to the people, coming and going from the back deck that has been newly enclosed, and allowing Sam, Whiskers, Oley and Roger, the kitties who love to sleep in the hay, to live in the barn. (which is also closed at night.) Everyone is safe, warm , and relatively happy, and there are fewer fights and less territorial spraying (the emphasis on the latter.) Samuel A. Cat is a cuddle bunny with people, and spends his free time jumping out from behind things and 'ROARING' the other cats. Samuel A. Cat and Whiskers are the first ones to greet visitors to The M.A.D. House Artists (providing that Nymphadora and Alexander Dog are not around.) Sam and Whiskers are the welcoming committee and auto inspectors. Best to close your windows, or you may have a cute furry guest waking up in your car on your way home (see WHISKERS.)