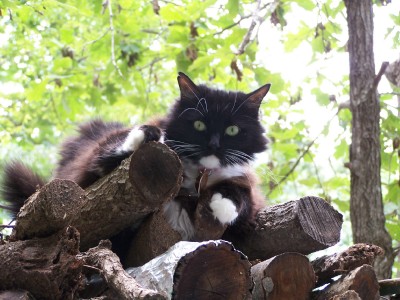 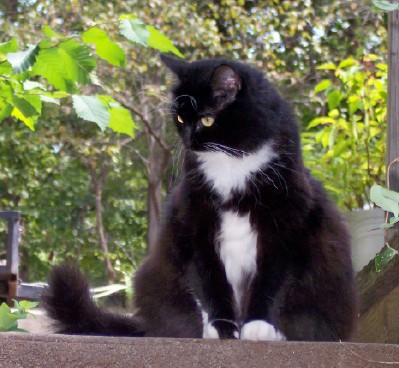 Whiskers is Dad's cat. This cat is possibly the strangest creature any of us has ever seen. She looks innocent enough. As a prominent member of the welcoming committee, Whiskers runs up to strangers to be petted, and just when you think it is safe to go into the water you are surprised by her finely honed claws. Her annual haircut gives new meaning to the phrase "Flayed Alive."

Whiskers came to us on a late november day some years back. Mom had driven to Tulsa with a teenage friend. Her girlfriend had been in an automobile accident, and she and Mom had gone to see the injured friend in the hospital. It seemed that the accident had been much worse than any of us had expected, and while we were at the hospital, the difficult decision was made to remove life support from the injured girl. Family and friends were devastated, Other family members were in other hospitals all over Tulsa. All in all a very wrenching experience. 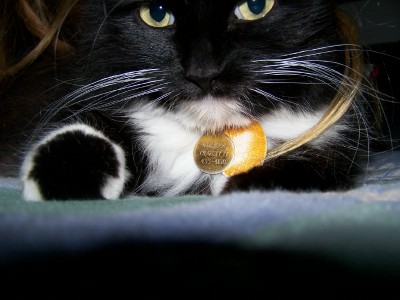 When the two returned to the home where my teenage friend's grandmother and great-grandmother were staying, the great grandmother greeted her with "Who told you you could come in here?" before she could even relate what had just happened at the hospital in Tulsa.

Upon returning to her Auntie's house where our teenage friend was to sleep, they found this kitten. Very cute and friendly, fuzzy and warm. It wrapped itself around their ankles as they stood on the porch saying their goodnights. The auntie said she refused to allow it into the house, hoping that on this very cold night it would just freeze to death.

Mom had about had enough of death, so she scooped up the kitten and took her home, saying, "I have had about enough Death today, I need some life." Once home, the first thing Whiskers did was scoot under the covers and curl up beside Dad's feet. So she became Dad's cat. Even with all the many unacceptable things she brings in on her fur and besides the fact that she smells as though she were perhaps part skunk. Even with Dad's aversion to things dirty or smelly, Whiskers became Dad's cat. 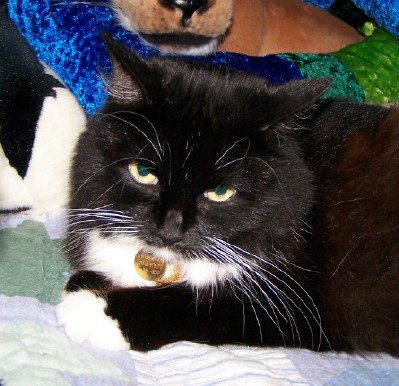 When she was spayed the doctor did something that left her very touchy and jumpy. This doctor is really better for large animals, and we learned the hard way that we use a different vet for cats. But after that experience, she became RAZORBALL. Just a bit more than unpredictable, on the psychotic side of neurotic...Whiskers' fur is so hot and uncomfortable that she requires a summer haircut each year, but that can be a dangerous experience for the barber. Mom usually dons the forearm braces she used in the martial arts for this maneuver. 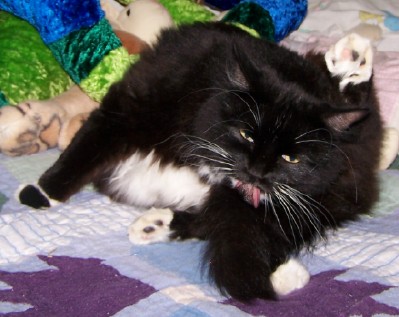 n spite of, or perhaps because of these eccentricities, Whiskers is one of our favorite kitties. you can have her on your lap for hours before she turns on you...And she always approaches visitors in a friendly way. At least that aspect of her personality has remained the same. If your car windows are open you will often find a soft black furry cushion asleep in the driver's seat when it is time to depart. On more than one occasion Mom has found herself with kitty as she drove to one meeting or another, and has had to use unusual means to provide for the safety of her guest as she went about the errands in a closed car. 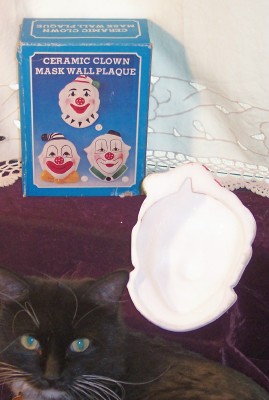 Whiskers was very effective as a sales person on this ebay item. Do you see the unexpected presence in the photo? 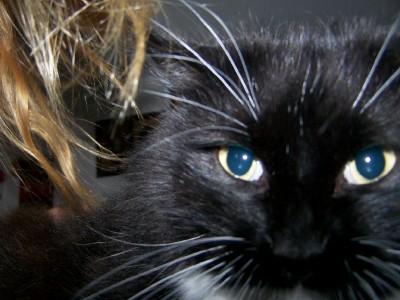 Winter weather has Miss Whiskers in the barn at night with two of our gentlemen kitties, Sam and Roger. Cute Furry/Feathered Creature of the Month for February, Sam is some kind of cat. He seems to be the reincarnation of Kimball's two cats, Nemesis and Sam (I). Sam is waiting for Kimball's return from college to take his place in the empty lap (good thing Dad has taken a shine to him, looks like Kimball is in Tempe for a bit longer.) Roger is something else again. Roger has extra toes, extra hair, and an huge frame. Roger's 20 lbs would seem to be rather imposing, yet he is one of the more shy kitties, and not aggressive at all. Sam spends most of his time in the barn jumping out at Whiskers and Roger, which makes them a bit testy in the winter. Mink has taken wonderful pictures of all the animals. There seems to be a new cat coming to freeload the cat food in the barn. Here we go again!